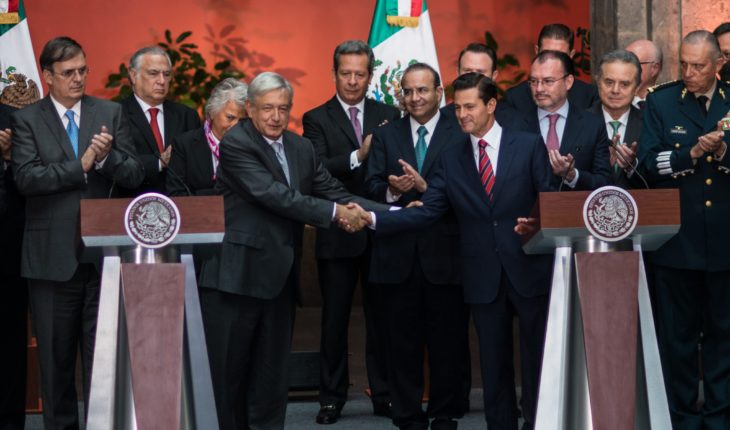 Andrés López Manuel Obrador President-elect and President Enrique Peña Nieto «officially» began the transition process. Both met – for the third time since the triumph of the Tabasco – along with their teams in the National Palace.
President Enrique Peña Nieto described the meeting as «unpublished» because in the first time that begins the process of transition with a defined team about who will integrate the next Cabinet.
«I have held third meeting with the President-elect to begin formal transition. «The will of our Government is the to get all the relevant information to those who will be the next Government holders», explained.
The President-elect held the context in which the meeting was held and said that it will be an institutional transition. «It will be a democratic electoral process, the mandate of our people is being fulfilled,» he said.
He stressed the support received so far from Enrique Peña Nieto. «We will respect the present Government until the last day of his mandate. We are very satisfied and thank this institutional gesture of respect and collaboration in a sincere way to the President and his Cabinet.»
will continue with the works of the airport: penalty
to be questioned on the project of the new international airport of Mexico (NAIM), both defended their positions and President Enrique Peña Nieto affirmed that his Government will continue with the works until it ends its period.
«This (NAIM) project follows its course every time that there are contracts assigned to construction companies. Not is it has braked, continuous. This is another issue where there are different views, but the project that started this Government, is a work that would be begging. What we have done is provide the information to the new Government. We will be friendly mechanism presented to postpone or give effect to what his Government to define», Peña Nieto said.
Meanwhile, the President-elect said: «we are going to consult with citizens on the subject, there are two options, we want everyone to participate, to give your opinion we will inform and act impartially without tipping the scales in favor of one or another alternative».
He added that the strategy of the consultation will be a method that possibly to apply to everything that requires the opinion of citizens.
«I am in favour of democracy and it has two aspects, the representative and participatory. This last is the one that we want to strengthen this new stage; best way to avoid mistakes is to ask. The people are not stupid, the village is charge. It will be a consultation liaison in late October,»he reiterated.
Pending Nominations Peña Nieto commented that the selection of the General Prosecutor of the Republic is a process belonging to the legislative branch, but not to the Executive, so far does not have an opinion on the possible shortlists proposed by the President elected.
For his part, Lopez Obrador said that you for the election or appointment of holders of the Ministry of national defense (Sedena) and the Secretary of the Navy (Semar) will ask for the point of view of the current Secretaries of both agencies in order to take into account their recommendations and choose the best profile.
He added that those who occupy these positions will be division generals and admirals in active and that its proposals for maximum security charges them will be announced before 1 December.
Balance of penalty at the end, the President was questioned on the final balance of his Government on issues such as security and economy.
«We will deliver a country with economic stability, low inflation and reasonable and manageable debt levels. Security, I recognize that there has been sufficient progress and believe that it will be a great challenge for the next Government and it is not up to the federal Government resolve. It is a very difficult and complex to reverse rates of insecurity», said Peña Nieto.
Without giving more details, he said that it will be in the delivery of its latest report of Government will pose where the current context and the areas where there was progress as well as the outstanding issues.
In this regard, López Obrador said not touch to qualify the work of the current Government but the same Mexicans once finished the six-year term.
To the be questioned on corruption issues as the case Odebrecht and the White House, the Tabasco said they can not advance anything about the way in which both subjects will return and just thank the opening of the Cabinet of Peña Nieto to be transparent and deliver, so far, all the information that has been requested them. 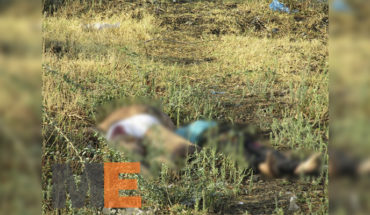 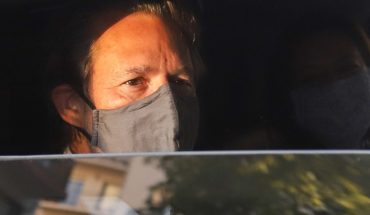