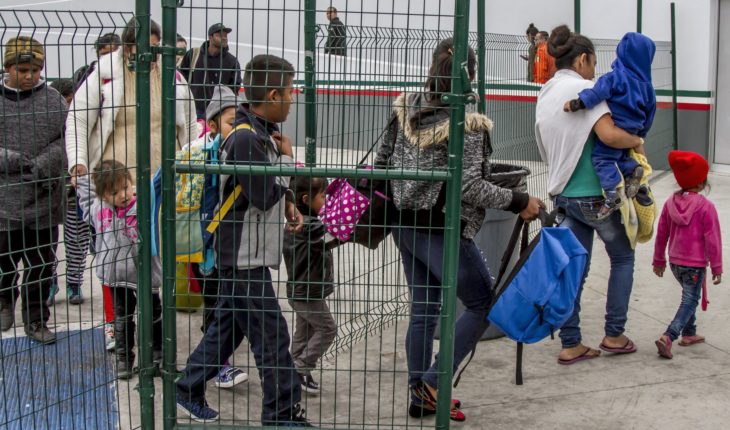 United States is still the dream of Latin Americans who migrate from their home countries looking for a better life, however, one growing number take aim arrive and settle in Mexico. In 2017 that figure doubled, reaching 28.5% of the migrants who arrive in this country, according to the network of organizations defenders of migrants (REDODEM).
In a report released Tuesday, the activists explained that this increase is due to the escalating panorama that migrants are before and behind them: the hardening of immigration policy of the American President, Donald Trump, prevents them from reaching that once was his goal; While in their countries of origin violence and poverty make that keep is not an option.
«Is closing the northern border by Trump policy, and they go to northern cities in the hope that can later be opened and they can enter, because many have relatives on the other side,» explained Animal politician Arturo González priest , representative of the Jesuit service to migrants and a member of the REDODEM.
The activist said that the people who come to Mexico, even if its original aim were United States, will become where finding a job, where they feel safe and less battered. Its decision on the destination which want to reach is deciding on the fly and often with little information or rumors, «but is what they have.»
The report ‘ the indolent State: count of violence on the migratory routes and profiles of mobility in Mexico’ network concerns that from May to December 2017, 65% of migrants who entered Mexico wants to United States; 28% want to stay in the national territory; another 6 percent said not knowing their fate and 1% went back to his country.
Regarding which declared unaware of his fate, the father González explained that many do not have a plan because they just want to «get somewhere», sometimes where they already have an acquaintance or family member, but with certainty: can not stay in Central America because they are going to kill.
«Talking to a Salvadoran mother told me ‘ father, prefer to go me, here will I kill.» Maybe one day I return them to see but see them live ‘ «, said the cleric.»
Flee from violence to a war migrant advocates warn that Mexico the situation it is not much better for latinos fleeing their countries of origin, mainly from Central America, mostly in Honduras, because the Government of Enrique Peña has also heightened in practice its migration policy, in addition to once in Mexican territory become prey to organized crime.
Although programs aiming to improve the situation of immigrants have been implemented during the Presidency of Enrique Peña, in fact the violence and fear have been used as deterrent mechanisms so that migrants give up their objective and go, warned activists from religious organizations and other houses that overlook migrant hostel.
They reported that people who pass through the country are victims of a double violence: hand extortions, robberies and organized crime and other violations of the authorities who detain them and ask for money under threat of deporting them. According to REDODEM calculations, in 2015 the police corps were more than a thousand 200 million pesos for extortion.
In addition, the Central and South American arriving in Mexico admitted to a problem that Mexico suffers from 12 years: the war against the drug cartels. However, their status as foreigners and their immigration status makes them more vulnerable to all kinds of abuses. «First we have to fix the problem as a country to think about receiving these people, because Mexicans and foreigners are threatened. I when I go into the shelters go out begging to return, and I’m Mexican,»concerns Arturo González.
The wall at home report details the distribution of abuses and crimes committed against immigrants, between the individuals (organized crime, security forces of the trains, among others) and the State, mainly police and immigration authorities. This figure has changed over the years in which REDODEM has made their reports: in 2014 the crimes committed by individuals against migrants were 80% against 20% of the State; the figure changed dramatically in 2015, where abuses of the State amounted to 41% and then fell to 17% in 2016. 2017 State participation rose back up to 25 percent.
Among major public officials that the network detects as abusers of the migrants are the immigration agents who bully them; the State Prosecutor’s offices who refuse to receive their reports; the State police officers who stop them to extort them and the State delegations of the National Institute of migration (INM) not serving the recommendations of human rights bodies.
«The wall if you are paying Mexicans, called National Institute of migration», said Jorge Alberto Pérez, activist of the Casa del Migrante in Chihuahua.
Migrant advocates described the Presidency of Enrique Peña with a negative balance in immigration matters, without substantial improvements after the violent sexenio de Felipe Calderón and even with aspects that worsened with the southern border, that program He represented operatives and arrests without respect for human rights. For the next federal Government, headed by Andrés Manuel López Obrador, ask that you listen to society and create a migrant care project with focus on human rights, not on national security.