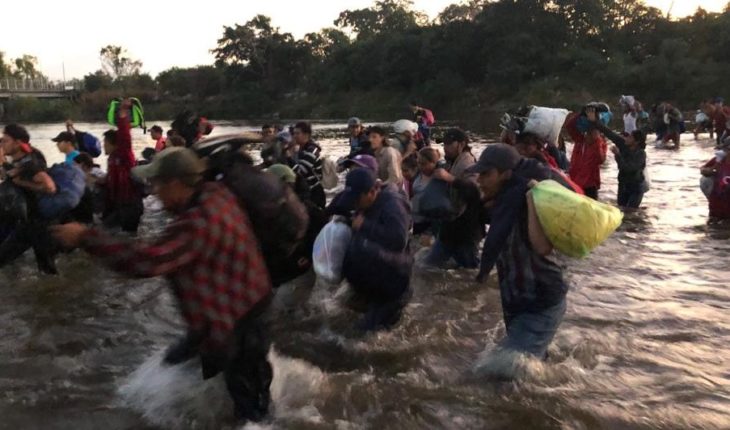 Hundreds of Central American migrants crossed the Suchiate River this morning and are already on the road linking the municipality of Ciudad Hidalgo with Tapachula, Chiapas, with the aim of crossing Mexico to reach the United States.
These are people who remained in the Camp of Tecún Umán, in Guatemala, and who last Monday encountered a National Guard barrier when they tried to enter our country crossing the Suchiate River.
Read: INM prevented NGOs from entering station where migrants are locked up in the caravan
Unlike a few days ago, on this occasion the migrants did not try to cross the vicinity of the International Bridge Rodolfo Robles, but did so by a point very close to the suchiate II border crossing, which is located a couple of kilometers from the bridge.
They also did not encounter elements of the National Guard so they were able to enter Mexican territory unimpeded.
At the moment, the migrant group is advancing towards Tapachula with a flag from the United States and one from Honduras, as well as banners addressed to Presidents Donald Trump and Andrés Manuel López Obrador that allow them to reach the US.
Several of them also be sent messages requesting a meeting with the Mexican president.

So far the National Guard has not implemented any action to stop the passage of these migrants and their passage is only monitored by State Police officers, Red Cross personnel and Civil Protection elements.
«I come here because there is scarcity and poverty in my country Honduras; the electricity goes up, the electricity goes up, but the wages don’t go up,» says Wilmer Enrique Funes, a member of the caravan who works as a bricklayer.
Wilmer is 37 years old and comes with his wife and son from Trujillo, Honduras.
Wilmer traveled from Honduras with his family in search of a better life. Photo Alberto Pradilla.
Another of the migrants, Harvin Daniel, 19, walks with a blanket requesting a meeting with President López Obrador.
Harvin is only 19 years old. He accuses that there is no work in his country. Photo: Alberto Pradilla.
Harvin comes from Santa Barbara, Honduras, and says he hopes the Mexican government will help him as he comes from a country where there is no employment.
Migrants emphasize that the groups they have entered have done so peacefully and call on the government to support them in regularizing their immigration status without using violence.

#CaravanaMigrante Migrants claim that the groups they have entered have done so peacefully and call on the government to support them in regularizing their immigration status without using violence.
?️ Video: @albertopradilla. pic.twitter.com/NOCxrpfjPq
— AnimalPolitico.com (@Pajaropolitico) January 23, 2020

This new migrant crossing occurred after about 500 people of Central American origin, mostly from Honduras, entered Mexican territory irregularly last Monday. On the same day, the INM reported that the arrest of 402 migrants.
Read: Government says there were no incidents with migrants, but images show otherwise
The immigration authority also reported that 58 other migrants «entered unsafe roads in the region’s jungle area,» so «elements of the INM Beta Groups are in search of them.»
The migrants detained on Monday were transferred to the immigration station of La Mosca, in Tuxtla Gutiérrez, where the INM prevented access to three members of the Human Rights Observation and Monitoring Collective of Southeast Mexico who have permission to visit the detention center.
At the time, the INM has reported that of the detained migrants, 228 were already deported to Honduras from Villahermosa, Tabasco. However, there are no exact figures on how many people have been arrested and transferred in recent days to La Mosca.
What we do in Animal Político requires professional journalists, teamwork, dialogue with readers and something very important: independence. You can help us keep going. Be part of the team.
Subscribe to Animal Politician, receive benefits and support free journalism.#YoSoyAnimal 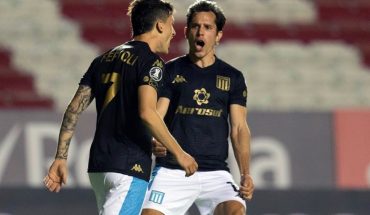