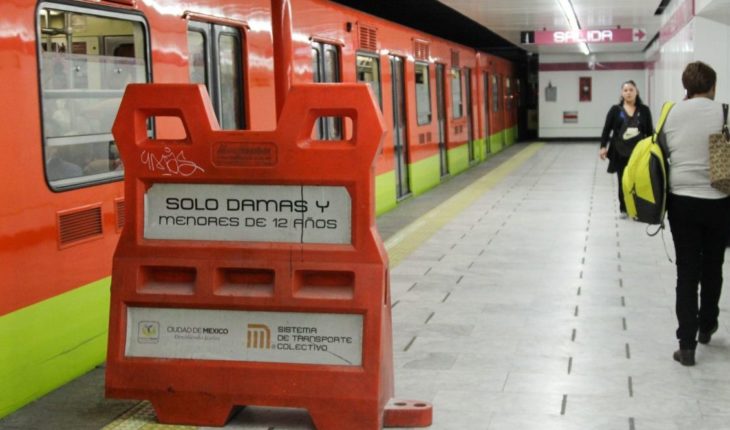 Local MEP Paula Soto presented an initiative to reform Mexico City’s Civic Culture Law, with the aim of strictly inhibiting and punishing men who deliberately invade or threaten the exclusive carriages of women and girls.
He said that the initiative proposed to ensure that the sanctions for the invasion of exclusive areas for women would not continue to be commutative and that the sanction for this crime was exclusively 36 hours of administrative arrest.
You may be interested: The Metro detects more than 23,000 fake mobility cards
In addition to ensuring safe spaces in which women can travel and travel safely in areas intended for public transport and that this exclusive space is not disrupted by any man, including public servants of the Collective Transport System (STC).
As well as making the necessary adaptations so that inclusive and clear language establishes signs to identify women-only areas; articulating a strategy to inform, raise awareness and raise awareness among public servants, security and surveillance elements, both public and private, among others.

The also chair of the Gender Equality Committee of the Capital Congress argued her proposal with the fact that women and children are a sector that is still the victim of acts of gender-based violence in some areas of public transport.
The capital legislator also lamented that on many occasions, attacks are not limited to a threat, but materialize into acts of violence such as insults, touching, sexual groaands, photo or video captures without consent, showing or friction of genitalia, beatings and sexual abuse.
Read more: ‘There are no benefits or social security, and they pay little’: that’s how older adults work on the Metro
She stressed that every day, within the Metro facility, women and adolescents in this capital suffer gender abuse and violence that put their safety and life at risk.
The MEP of Morena noted that even though the Collective Transport System has put in place prevention measures, the penalties for committing such violations are not strict enough to prevent further violence.
What we do in Animal Político requires professional journalists, teamwork, dialogue with readers and something very important: independence. You can help us keep going. Be part of the team.
Subscribe to Animal Politician, receive benefits and support free journalism.#YoSoyAnimal