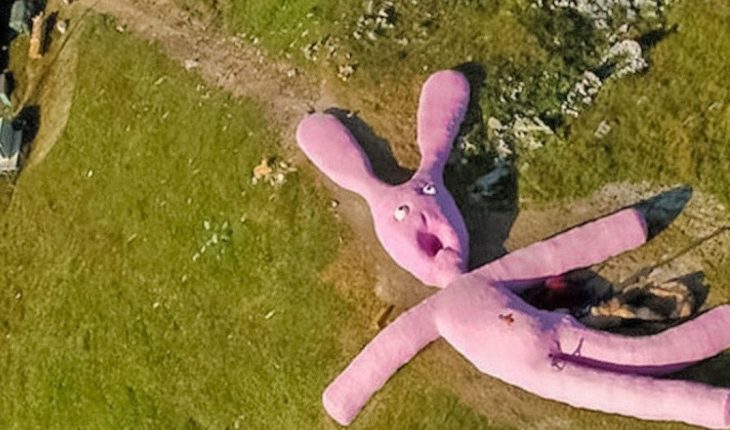 The doll is located in the area of Monte de Colletto Fava, in the Piedmont region, Italy. It was the source of much speculation about the position in which it is located.

That he was thrown from a plane, or that he fell to the ground or fainted, is all part of the floklore around Hase, as it is called the giant pink stuffed doll. But the truth is that the work is the creation of 4 friends who form a group called «Gelitin» who understand art as fun and those who inspired «The Travels of Gulliver», decided to create a doll for tourists to climb and they can slide.
Hase, is made inside straw and lined with pink fabric, the doll that has already been deteriorating for 15 years, giving a rather chilling, rather than tender appearance. 60 meters long and 6 meters high.

But seen and considering the pandemic, and the deterioration of the innocent bunny, which at this point seems to be hit by a truck. Here we leave the coordinates for you to search for it in Google Maps from where you can view it. The coordinates are: 44 14 ‘37.61’N 7’46’10’. In case of error, just look for a huge pink spot that you’re going to find there.