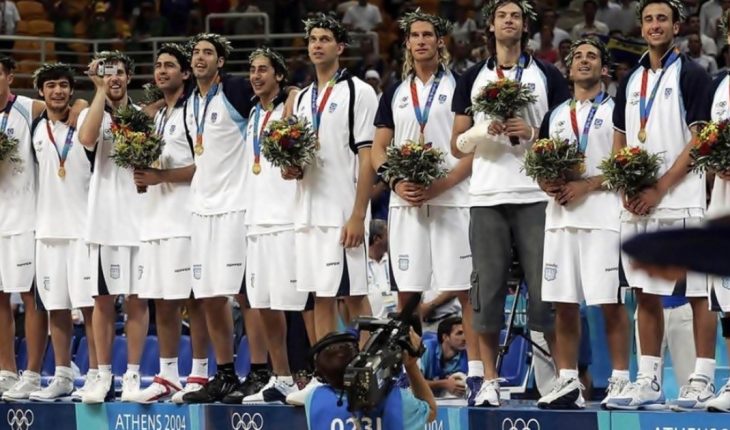 The 2004 Summer Olympics in Athens were well remembered for the Argentine delegation, especially on 28 August. While on one side Marcelo Bielsa’s team managed to win the title without having received goals against and with the figure of Carlos Tevez, in the basketball stadium Rubén Magnano’s team made history. With the defeat and pain of what had happened a couple of years ago with the controversial final against Yugoslavia at the Indianapolis World Cup, the team arrived as a danger to any rival along the way, but the laurels did not accompany him. The ensemble arrived with one arm back and another forward, but with the figure of Manu Ginóbili, who was already NBA champion with the San Antonio Spurs.That’s how the team got to Greece, but not how it went. Although the Bahiense already had several eyes on him, he was supported by experienced bases such as Pepe Sánchez and Alejandro Montecchia and the appearances of Luis Scola, Andrés Nocioni and Carlos Delfino as young promises who were to be legends.

The group stage did not go as planned. Four of the six teams were in the round and those of Magnano achieved three wins and two losses, but the first win leaving one of the images that will endure in the time of the Olympic Games. With 3.8 seconds to play, Serbia and Montenegro won 82-81 and at that time Ginóbili’s «palomita» appeared for the agonizing victory and a small rematch of the World Cup.With a comfortable third place, in the quarter-finals Greece appeared, second in their area. In a match that was already vital to winning the medal, the figure of Walter Herrmann emerged, who that night with a few minutes left his mark for the story. However, the joy of victory was going to last shortly because between securing the medal and fighting for the bronze one appeared the United States.
Dwayne Wade, LeBron James, Lamar Odom, Allen Iverson, Tim Duncan… While they did not arrive with a good walk in the tournament, they were the candidates for the title, considering that of 15 Olympic Games, 12 times they had achieved the gold, only surpassed by the USSR (2 times) and Yugoslavia. But this time there was a new punch. Similarly to NBA stars, Argentina brought out talent, ability and devotion to not being another victim of the world’s best and shook Athens with an 89-81 victory that put an entire generation at the center of the scene, which was to crown the greatest feat in history. In the final, and with the silver in his pocket, Italy appeared. It was August 28 and just a few hours earlier the costume was joy to defeat the Dream Team, but you had to go out to an old acquaintance who in the group stage was left with the 76-75 victory, when they were both qualified.

A before and after.
Since 1992, when they started playing the NBA, only the U.S. won Olympic gold. Except in 2004.
Today marks the 16th birthday of probably the most important achievement in the history of Argentine sport and you can revive it: @FIBA passes the final on its Facebook at 12. pic.twitter.com/eY1s2NcvXD — CABB (@cabboficial)
August 28, 2020

This time, there was no doubt and the party’s sending with the United States was everything. Brightness, class, quality and work marked this team that against the Europeans had all that to be at the top of the Olympic Games with a victory 84 to 69, taking 15 points advantage and the gold at home. There, at that very moment, the name was made: the Golden Generation. A selection that set aside individual egos and that to date remains a reality based on friendship, commitment and the passage of a command that still has Luis Scola at 40 years fighting and dreaming.

The day basketball eclipsed football. In the same stadium.
And during a game in Santa Fe.
People turned their backs on the game to watch TV and it exploded in the grandstands behind the gold. One more proof that the GD went through everything and belongs to the people.
Via @matiasherenu22 pic.twitter.com/T4eq2J7a4j — CABB (@cabboficial)
August 28, 2020

That team generated a revolution in Argentine basketball, widened borders and piqued the interest of Europe and the NBA. Before this tournament, only Pepe Sánchez, Rubén Wolkowyski and Manu Ginóbili were the only ones in the best league in the world, now there are 12 players on that list, with the sights set on Campazzo and Bolmaro.La Golden Generation was more than the feat in Athens. It was a way of thinking about the game and the team, a way of working and growing that was held in time with Magnano, Lamas and Hernandez as coaches and that gave the best litter in the history of this sport for Argentina.