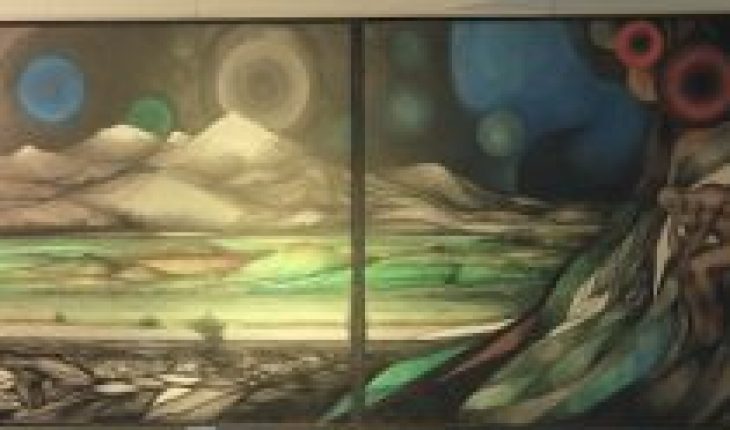 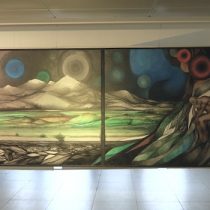 «Sons of the Universe» is a great opportunity to get to know the work of Fernando Daza, one of the most emblematic Chilean muralists. It is an exhibition consisting of ten works within which are four murals and sketches that account for the processes and the work at scale carried out by the artist in his work.
Due to the sanitary measures by the pandemic, the exhibition can only be visited in Espacio Arte, located in the Civic Center of Lo Barnechea (Av. Rodeo 12,777) until December 2020, upon registration in the mail exposiciones@lobarnecheacultura.cl The exhibition includes face-to-face guided tours and material in the form of an educational notebook to learn as a family which will be disseminated through the website soon.
For the mayor and president of the Cultural Corporation of Lo Barnechea, Cristóbal Lira, «it is an honor to have the exhibition «Sons of the Universe» by Fernando Daza in Espacio Arte, a place that, due to its location and the pandemic, we are using it as a safe waiting sector for the neighbors who come to make formalities to the municipality, Civil Registry and Local Police Court. It has been a unique opportunity to bring art closer to the neighbors and make known the artistic and cultural legacy of the great national muralist Fernando Daza», he says.
Unknown to some, Daza became known as an artist for depicting urban landscapes with great perspectives of the river and the Andes Mountains. His works stand out for their unity of style and the predominance of cold colors, sometimes intervened by light during twilight hours. However, Daza was a multifaceted artist who devoted himself to muralism, human figure and surrealist style, among others, and who also worked for years in the area of advertising.
«Fernando was very painter, which is what interested him most. He cared about creating. That’s why he spent all day painting in his workshop, not caring too much about promoting his work in commercial spaces,» says Ximena Ramírez, widow of Fernando Daza and executor of his work.
Daza has been considered among the most important Chilean muralists. He is the creator of the work «Homenaje a Gabriela Mistral», painted on ceramic pieces and located on the side of Cerro Santa Lucía that overlooks the Alameda Bernardo O’Higgins, in Santiago. His mural works relate to the great influence that the Mexican movement exerted in Chile since the 1960s.
During his stay in Venezuela he continued his career as a painter and evolved into dreamlike expressionism. Since then, large spaces and dizzying compositions have prevailed, also presenting noticeable changes in their conception of color and stroke strength.
His mastery of drawing is demonstrated in his work as a cartoonist he has shared with Chile’s greatest creators, including Pepo and Jimmy Scott. He also highlights his collaboration in various publications such as Topaze and the Miami Herald in the USA.
In later works, after filing in Miami, she addressed the theme of war, turning to the figure of women and children as symbols of those who deny war.
About Fernando Daza
Fernando Emilio Daza Osorio was born in Santiago on May 1, 1930. He entered the School of Fine Arts in 1951. He was a pupil of Pablo Burchard, Gregorio de la Fuente and Marta Colvin. In 1976 he self-exiled in Venezuela and later settled in Miami, United States. He returned to Chile in the first decade of 2000. He died on February 17, 2016. During his extensive and productive career, Daza exhibited in various places inside and outside Chile. Among his most emblematic murals are «Homenaje a Gabriela Mistral» (1970), located on Cerro Santa Lucía, «La Search» (1973) which is located in the Club de la República and «Chile, Mi Patria Surreal» (2013) in the Center of Justice in Santiago.
About Space Art of the Civic Center of Lo Barnechea
On the ground floor of the Civic Center is Espacio Arte, a gallery specially implemented to exhibit works of art. It is a large space, of 250 square meters, that has more than 30 linear meters of wall to exhibit works.
Since 2017, 26 art exhibitions have been held in this space, from various disciplines (painting, photography, engraving, sculpture, object art, among many others), giving the community the possibility of having a close encounter with the national arts.
Among the exhibitions that have been held, stand out those of the artists Malu Stewart, Matías Santa María and Andrés Becker.
The Civic Center of Lo Barnechea is a building open to the public, which seeks to facilitate the realization of formalities to the neighbors, concentrating in one place public and municipal services related to transit, works, attention to the neighbor, office of parts, education, environment, planning, among others. This space also has a collection of permanent works of art, which are distributed throughout the building and have been acquired through sculpture symposia, as well as through proposals made by prominent national curators. 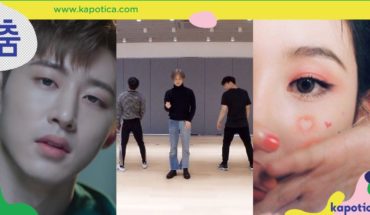 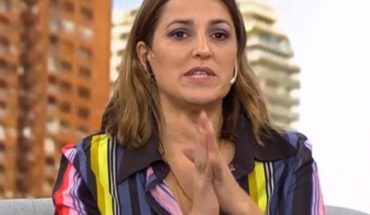 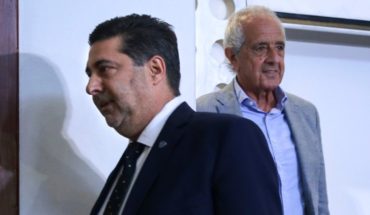