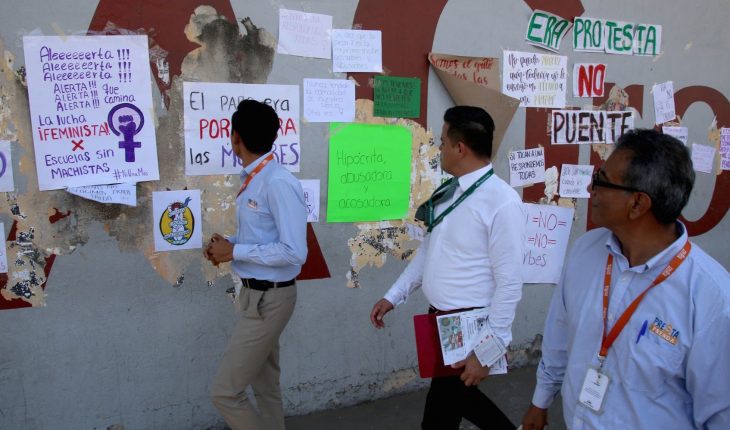 In May 2019, «Mar» (pseudonym), 19, only went to see his tutor, Professor Silvio «N», who also taught him in the second semester of his law degree at the University of the Isthmus of Oaxaca (Unistmo), Ixtepec campus. He, over 30, closed his cubicle door, began touching his shoulders, kissed him on the forehead, then lowered his hand and even put his under the girl’s blouse.
She stayed in shock not knowing what to do and after leaving there he tried to avoid it at school. But another day, he was in makeup, he insisted that he go back to tutoring and when he was alone with her, he told her that he liked to paint his lips and kissed her again. Scared, she went out and told everything to a passing partner, she decided to report it to the school authorities and, some time later, legally.
On September 10, the Oaxaca Attorney General’s Office decided to link him to sexual harassment prosecution, a crime that, if found guilty, is punishable by one to three years in prison, plus the same period of disqualification as an official, as he works at a public university.
However, Unistmo has already assigned him three groups to remain a teacher next semester, which will begin next Monday, October 12.

In the face of precautionary measures issued for the protection of the student, it was only taken care not to teach her again. Although when he reported internally, a year and a half ago, he did have him as a teacher for another semester; the university only sanctioned Silvio «N» with a «strangeness» on June 24 and instructed the teaching staff not to close the doors of their cubicles when they are with students inside.
In an interview with Political Animal, the academic vice-chancellor of the Ixtepec campus, Israel Flores, said they will take no other action against the teacher until there is a final court ruling. Not even a provisional suspension, because they believe it would affect their labor rights.
But Silvio’s case isn’t the only one. Professor José Guadalupe «N», from the same career, is also reported to the Public Prosecutor’s Office for harassment and sexual abuse against another student. In that case, according to Flores, there was no internal complaint, so no action has been taken against him. Mar, for example, will have him as a teacher this cycle, and there are groups that are assigned to both professors, despite the legal processes they have for having harassed students of the university.
Revictimization and persecution
After what happened to Professor Sivlio «N», Mar spoke to a teacher who gave her confidence and is the one who has accompanied her throughout this process. He also told the head of the law degree, but he’s never going to forget one of the things he said: «That’s how teachers are.» That and that recommended him better or approach the cubicles of several.
The principal spoke to the teacher and that immediately affected Mar’s studies. She says the teacher began making sarcastic comments in class that women shouldn’t complain so much, and that when she raised her hand to participate or ask something, she told her not to talk or just ignore her. Then she also neglected the subject matter and her grade dropped, a problem that continued the following semester because she had him again as a teacher.
The only thing he won with his complaint was that he would no longer be his guardian and no longer have to be alone with him. But still, Silvio «N» kept sending her cell phone messages to greet her, ask her if she was going to go to events and if they could see each other, to the degree she preferred to change her phone number.
From the reprimand he received, Mar did not even know, because no one informed him what had happened to his complaint, what process was followed, or whether he had a resolution. What he did know was that months later, the Unistmo gave him the definitive place as a teacher.
According to Vice-Chancellor Flores, in the internal process it was determined that it was not a serious offense and that is why he only deserved a warning, which remains in his file, but does not prevent him from continuing to teach unless he re-entered. He also claims that they decided that Silvio «N» would never have women in charge of the mentoring program again. Although the teacher who has accompanied the students says she has continued as tutor to other girls.
Thus came 2020 and the wave of feminism that travels all over the country. On March 8, International Women’s Day, a «clothesline» of public complaints against stalkers was organized at the other campuses of the Unistmo and in several of the Oaxaca State University System (SUNEO), composed of 17 campuses that have to the same rector, Modesto Seara.
Not knowing anything about what had happened to his internal complaint, Mar now publicly filed his case against Silvio and a colleague of his accused José Guadalupe «N», whom he later reported to the Prosecutor’s Office.
But the reaction of the university community, teachers and students, was not in support, but quite the opposite, he says. She has suffered the rejection of her peers, that no one supports her and throws her as a liar, that she does not speak to her or answer school questions, that a girl says that she should not dress provocatively, and until they surround her in an area on the shores of the campus and raise her; report that there are teachers who say that she has psychological problems, who have affected her grades despite fulfilling her duties; and that one has asked students to off the teacher who helped her run, because on campus feminists don’t fit.
Along with the complaint to the Public Prosecutor’s Office, Mar filed a complaint with the Ombudsman’s Office of Oaxaca, which questioned those involved. According to the student, he accepted what he had done to her but justified that it was unentional; while the career director said she offered to go to the Women’s Justice Center and didn’t want to, but she claims this is false.
The public complaints of Women’s Day did provoke a reaction from UnIstmo: on March 14, she formed a commission of inquiry into Mar’s case and that of her partner against José Guadalupe «N». According to Vice-Chancellor Flores, it consists of seven members, four women and three men from the Tehuantepec and Juchitán campuses, none from Ixtepec or the law career, to ensure their impartiality.
In the last days of face-to-face classes, when activities were ordered to be stopped by the COVID-19 pandemic, the students who reported harassment were taken out of their classes and without prior notice had to present their cases to that commission, without the support of lawyers or the teachers who have given them accompaniment, or psychological care, which they considered revictimizing.

Asking the vice-chancellor why this interrogation was done if Silvio ‘N’s case had already been sanctioned a year earlier, he replied that they will «review the teacher’s performance, on the one hand, and check whether the sanction, the punishment, was appropriate, also awaiting the resolution of the jurassical body, which is external to the university.»
And also, because the investigating committee is not only evaluating allegations of sexual harassment, but will also investigate the teachers who have accompanied the students they report, as there are complaints about their academic performance.
Complaints that these teachers consider to be an orchestrated persecution by the teachers themselves.
Waiting for sentence and results
One of the teachers who has accompanied the victims says if the university is now investigating these cases is because they became media, but there have been other allegations, as a year ago, that she reported that a student had threatened her partner to kill her. But Flores says the teacher talks about rapes and threats of femicide that were never reported internally and that’s why there were no investigations before.
By 8 March, other SUNEO universities, the same network to which Unistmo belongs, also had «clotheslines» of complaints. Lulu, a student at the Universidad del Mar, says there were many complaints from an already eldest adult teacher, who is very conservative and even religious, but to all the students it makes them uncomfortable with looks at their necklines or attempts to approach them.
The university opened a portal to file complaints online, but she tried and never managed to get her to load the page. And now that he wanted to consult her, six months later, he found that he is no longer even available and when asked he was told it was temporary.
In the Unistmo, the vice-chancellor of Ixtepec says that the investigative commission carrying the cases of Silvio «N» and José Guadalupe «N» has prepared a report to present to the Academic Council, the highest authority of the University, but until there is a judicial decision.
In the first case, the judge placed a period of two months from the link to the process for the supplementary investigation, so in just over a month it will have to be resolved if he is found guilty. In the second, the Prosecutor’s Office has not yet judicialized the research folder and the student is waiting for the initial hearing date to be set in the coming days.
Mar just wants justice done and that Unistmo protects the rest of its students and the generations to come from not suffering the same harassment that she was a victim of.
«I want justice and that the University does not ignore. Because that happened, it happened to me and it can happen to others, and they’re going to keep doing that, with total impunity, and college as if they didn’t know anything,» he laments.
What we do at Animal Politics requires professional journalists, teamwork, dialogue with readers and something very important: independence. You can help us keep going. Be part of the team.
Subscribe to Animal Politics, receive benefits and support free journalism.#YoSoyAnimal 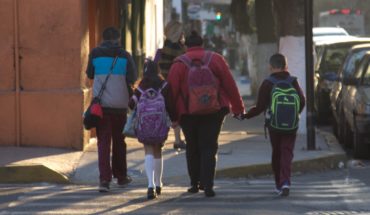 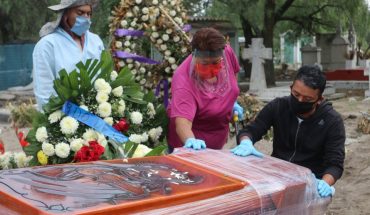