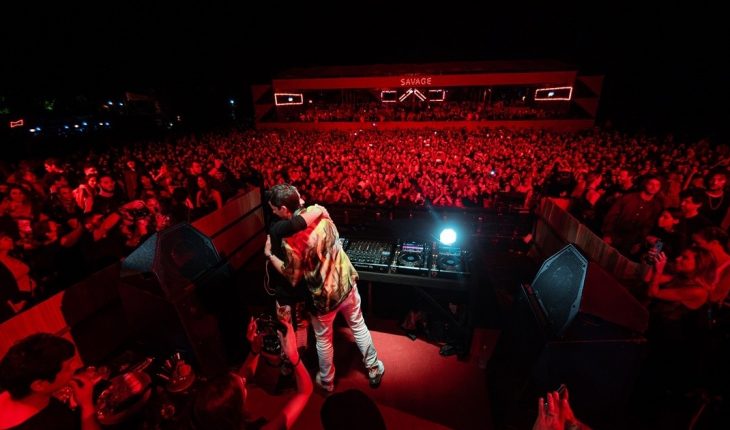 At this point in the part… of the pandemic, it is no longer news to say that the face-to-face events, the music and the meeting returned. The current protocols have been allowing massive events for some time and everyone took the opportunity to grab that envy that the flexibilizations gave. However, what happened with Savage was different. And it is that this electronic party, which has to its credit a name with a lot of specific weight within the scene, returned for its seventh anniversary last Tuesday, October 7, fitting in with the Wednesday holiday and summoning hundreds of people to enjoy an outdoor show.
Based in Mandarine Park and with a wind that not only blew the hairs and Hawaiian shirts of those present, but also helped to mitigate the hot temperature of a date so close to the beginning of summer. And the music, of course, the protagonist of the night, which began at about 22 while the grounds of the Punta Carrasco spot was increasingly filled with groups dancing with Facundo Mohrr, resident DJ of Crew Savage of great trajectory that captured all the expertise that he knew how to get in the most emblematic clubs and festivals such as Burning Man, Coachella and Woomoon.For a few hours, Facu warmed up engines for what was the great guest of the night: Dixon, who returned to Argentina from Germany to fill the general sector with music, which was prepared to accommodate more than 4000 people, the VIP sector and its 900 spectators and backstage, where about 350 people enjoyed the show with Funktion One sound technique.
A multifaceted artist, Dixon paused the direction of the renowned record label Innervisions, the Trasmoderna cycle of events and the clubbers clothing brand Together We Dance Alone to demonstrate, in front of the Argentine public, that not for nothing was chosen by Resident Advisor as the best DJ for four consecutive years. And, at the same time, with the feedback of this type of event, the Argentine public showed Dixon that, certainly, he is one of the best harangues in the world for any genre that is proposed to him. A dream night for Savage, who closed his seven years of life stomping on the Buenos Aires waterfront.