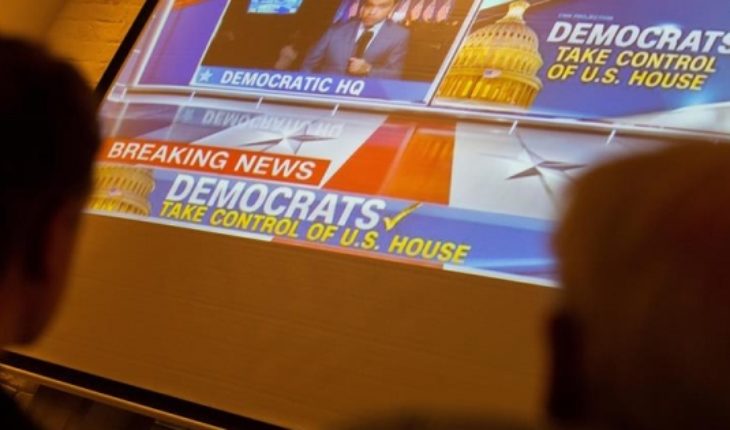 But did not the expected «blue wave» democratic triumphs in the mid term elections in the United States, opposition to President Donald Trump can celebrate their new majority in the House of representatives.
Democrats regain control of the Chamber after 8 years, which sets up a new Outlook for the remainder of the mandate of the controversial ruling. In addition, another important factor will be the new establishment of the House of representatives, more diverse and with a record of women.
Figures that left the election reflected all the polarization of the American electorate. Luis Fajardo, of the BBC, «the most obvious result of this election is that the country is more divided than ever. After two years in power, Trump has returned to get a support mass of a part of the country, mostly rural, white and conservative. The other half of the country, urban, multicultural, liberal, also came out to vote en masse against».
The new scenario, Democrats won at least 26 districts of the house occupied by Republicans, surpassing the 23 seats they need to take control. According to the last count, opponents add 219 seats to the opposition and 193 for the Republicans.
The new stage was overtaken last night in his victory speech by the Democratic leader of the House, Nancy Pelosi, who said that «tomorrow will be a new day in the United States. Remember this feeling: is the power to win (…) «Now what is to restore the Constitution, the system of ‘checks and balances’ (checks and balances) facing Trump administration», said.
Republicans, on the other hand, can breathe easy have preserved certain governorates that were at risk and have expanded their domain in the Senate: have 52 senators confirmed, versus 45 Democrats.  In Governors, Democrats added 22 and 25 Republicans.
Republicans keep the Senate virtually guarantees to Trump that will not lie in an «impeachment» when Democrats in the House of representatives opened investigations against him seeking, including its statements of taxes, interference from Russia in the election of 2016 and the measures taken by his administration. The support of 67 of the 100 senators would be needed to approve it.
However, by insurance are to the President two years of Government uncomfortable ahead until occur in his re-election bid in 2020.
According to Bloomberg analysis, «a democratic Chamber, the first since 2010, would leave Trump without the support of the Congress to introduce their agenda, which includes another round of cuts in taxes, funds for its border fence and attempted to turn back to the Obamacare «.»
However, with a divided Congress, Trump can continue reforming the federal courts and departments of his cabinet with a Senate led by the Republican party ready to confirm their candidates, adds Bloomberg.
Facing presidential elections in 2020, everything points to that it will be a very hotly contested poll. «This election sets the stage for a highly competitive presidential election within two years,» in which Trump will seek re-election, a columnist for the Washington Post, Dan Balz supplemented. For Luis Fajardo, while «Trump is unleashing the wrath of half of the country, continues to be an electoral locomotive despite two years of staunch opposition of the Democrats».
More diversity elections also reconfigured the conformation of the camera. The election will introduce a record number of women in the Chamber next year. So far, at least 92 women have been chosen for the camera, surpassing the current record of 84.
But the elections also introduced more diversity to the camera. Not only is the case of Alexandria Ocasio-Cortez, which happened in less than five months to serve cocktails at a New York bar to become the youngest Congressman in the history of the United States with only 29 years.
Also thanks to this election will come to the Congress the first women Muslim (Ilhan Omar and Rashida Tlaib) and indigenous (Deb Haaland, by New Mexico, and Sharice Davids, Kansas).
Ilhan Omar, born in Somalia in 1981, will become in January the first Muslim woman in the U.S. Congress after obtaining nearly 80 per cent of the votes of the fifth district in Minnesota.
Omar, who will also be the first somali in the House of representatives, will not be alone in his feat, because he will accompany you Rashida Tlaib, candidate for Michigan, the State where he was born in 1976, in the city of Detroit.
Haaland, aged 57, is a single mother and belongs to the Laguna Pueblo tribe. His win as a Democrat candidate was virtually assured in the first District of New Mexico.
Meanwhile, Davids, of 37 years, worked in the White House during the administration of the Obama expresidenteBarack and will be also the first person openly LGTBQ (lesbian, gay, transgender, bisexual and queer) of the Kansas Congressional delegation.