Mexico.- The march to demand peace and security in Mexico led by the poet and activist Javier Sicilia and relatives of the Mormons killed in early November, decided at the last minute, this Sunday, not to meet with security cabinet officials in the National Palace of the Mexican capital. Sicily and members of the LeBarón family, who marched for four days from the central state of Morelos to Mexico City, had asked the president of Mexico, Andrés Manuel López Obrador, to receive them but the representative warned that instead he would be the security cabinet.

Among others, the Secretary of the Interior, Olga Sánchez Cordero and the Secretary of Public Security and Citizen Protection, Alfonso Durazo.» We have nothing to talk to the security cabinet,» Sicily said at the rally with which he closed the fourth and final day of the walk that started hours earlier on Reforma Avenue.
They reduced our matter to a bullet issue, rather than a bullet policy, rather than a state policy. We’re not going into the National Palace,» he added.

Instead a peace march commission went to the National Palace to deliver a series of documents, including a written proposal, on a transitional justice policy developed in conjunction with victims of disappearances, killings and Displaced. The poet and activist said they did not agree to enter «because it is not an agenda to discuss with police and military.» In addition, he considered that the problem of violence and insecurity in Mexico has been undermined by López Obrador «and like the previous presidents (Felipe Calderón (2006-2012 and Enrique Peña Nieto (2012-2018) reduced the drama and humanitarian tragedy of this nation to a bullet business.» He said insecurity in Mexico is not going to be solved with hugs as Mentioned by López Obrador in his phrase «hugs, not bullets».
It’s not a right policy. Neither bullets nor hugs, it’s a state policy the size of horror,» he said.

In his speech, Sicily addressed López Obrador: «We know that you are not responsible, you inherited this horror of administrations that only had imagination for violence, impunity and corruption.» But he subsequently accused him of «turning his back on the agenda of truth, justice and peace, the nation’s priority (…) and to use a language that instead of calling unity polarizes the nation and divides.» The mobilization toured Reforma Avenue and made stops at the anti-monuments to the tragedies of the children of the ABC Nursery, the miners of Pasta de Conchos, the disappeared of Ayotzinapa, by the femicides in the country and to the massacre of students from Tlatelolco in 1968.

On his arrival in the Zocalo capitalino there was a skirmish between members of the march and people who said they were supporters of López Obrador, but did not progress to majors. For Sicily, the 2019 violence figures prove that López Obrador’s strategy has not yielded results. Mexico reported 34,582 murders in 2019, the highest annual figure in 20 years of official registration, although there is a trend towards stabilization. And recently, the National Commission for the Search for People updated the number of missing to more than 61,000 cases. 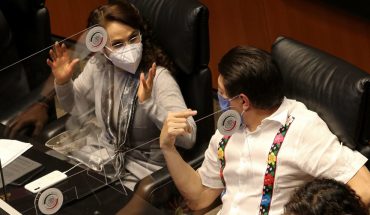