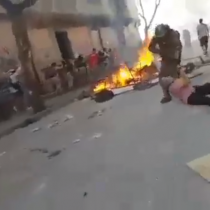 The stir caused the video in which a carabinero assaulted an older adult at a demonstration in Ramón Corvalán street, in downtown Santiago. In the audiovisual record, it is observed that a man was approached by two Special Forces officials, who arrested him and proceeded to beat him, while they were recorded by the people at the site. Women who had participated in the march tried to stop the aggression.
The situation has already generated reactions in the political world. Personeros of the Socialist Party (PS) rejected the act through the social network Twitter, among them its president, Alvaro Elizalde, who demanded the Minister of the Interior, Gonzalo Blumel, «to instruct @Carabdechile investigate and sanction, without delay, this brutal aggression against Patricio Baocio. Enough repression! The DDs. Hh. must always be respected.» In another tweet, Elizalde reported that «the PS will initiate legal action against officials in @Carabdechile
involved in this act of violence and brutal repression against Patrick Bao.»
Senator Juan Pablo Letelier also expressed his rejection. «Images can’t withstand analysis, @gblumel
you have in your hands the urgent change that requires @Carabdechile. We expect tomorrow the fall of carabinieri involved and the claim headed by Minister of the Interior for assaults against older adults.»
Meanwhile, also Sen. Isabel Allende noted: «Q’ explanation, sanctions and measures so that we don’t see a 69-year-old man brutally beaten in the face of the impotence of young girls q’ try to stop the aggression. Q’ happens to those Carabinieri? Immediate intervention in addition to justice».
On the other hand, Senator Rabindranath Quinteros argued that «last week was Ian in Puerto Montt and today an Older Adult in Santiago! The brutality with which Carabineros is acting is pushing tolerable limits and the Ministry of the Interior must investigate and punish those responsible once and for all.»
«Carabineros acted in a dismay»
The one affected is a 69-year-old man named Patricio Bao. In conversation with 24 Hours, Bao recounted his version of what happened. «I accompanied my wife and daughters to the place of Plaza Italia, Alameda, all those parts where I find the violence that fell upon me unnecessary. Carabineros taught right-handed and sinister. I tried to defend myself but it was impossible to avoid it.»
The victim added that «demanding my rights does not necessarily imply violence on my part. Carabineros acts in an inordinate manner, without any judgment against a person… I’m old enough. They in these situations are blinded, do not have a formal criterion or someone who tells them the procedure they are employing is wrong. Having brutally beaten me on the ground, trying to incorporate myself, they continued to insist and there was no need to continue assaulting me.»
Finally, he recounted that «after much delay, because many young people were also apprehended, I was taken to Office No. 1 to find injuries. They put stitches on me, because the wound was quite considerable. I think about 10 centimeters. I’m placed I think about 10 points and four on the eyelid of the right eye.»
Carabineros’ version
Regarding the event, the head of the Metropolitan West area, Enrique Monras, assured that the attack on Patricio Bao occurred in a context of «violent attacks on our personnel».
«This is a fact that happened yesterday, Sunday, in the sector of Vicuña Mackenna with Carabineros of Chile in the context of violent attacks on our staff. Carabineros rejects any type of violence and, by virtue of our commitment, translucency and respect for human rights, we are obliged to provide additional background to those who have been disseminated, so that the citizenknows the origin and context of this case,» he explained to Emol.
Monras explained that Bao «was arrested for severe disorder and attacked carabinieri who were clearly disadvantaged numerically and proceeding in the detention of other violent is players, who were throwing blunt objects.»
«His detention was declared legal by the Guarantee Court, and he was even decreed precautionary measures of monthly signature and prohibition to approach the place within a radius of 500 meters. In addition, a 90-day investigation period was set,» he added.
Despite this, it reported that «we have arranged an administrative investigation in order to assess the police procedure and determine whether the use of the force used is in line with institutional protocols».